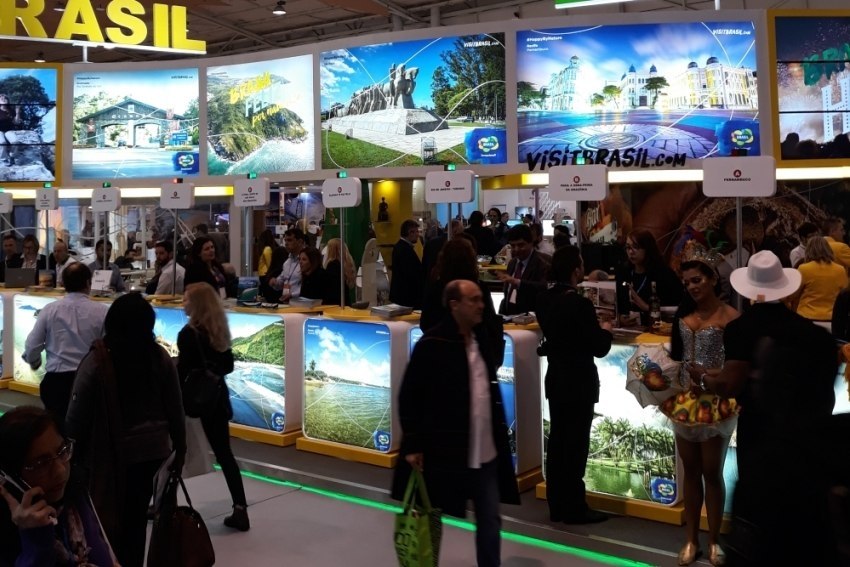 BTL – Lisbon Travel Market and promoting Brazil as a tourist destination
Considered one of the most important tourism fairs in Europe and a must-attend for more than 70 thousand people who walk through 40 thousand square metres during the five days of exhibition, BTL - Lisbon Travel Market closed last week with a positive balance for Brazil.

With 23 exhibitors, 11 of which destinations, a Convention Bureau, seven tour operators, two accommodation and two airlines, Brazil's stand was one of the largest in the international pavilion. In addition to networking, receiving information and promotional material about the destinations and listening to good national music, visitors could also enjoy Brazilian delicacies such as guaraná, coffee, caipirinha, tapioca cake, canjica and cheese bread.

Green and yellow were also present in the stands of destinations such as Ceará, Bahia, Rio Grande do Norte and Florianópolis, this one attending BTL for the first time.

For Embratur's president, Teté Bezerra, BTL is an important platform to bring Brazil closer to the Portuguese trade and tourists. "Connections between Brazil and Portugal are important to lead Portuguese tourists to Brazil and the goal of participating in this showcase is to promote gastronomy, natural beauty and cultural attractions, as well as to assist the professionals and representatives of the Brazilian destinations marketing their tourism products to international public," she said.

The Embratur delegation also took advantage of the trip to Portugal to strengthen ties with TAP, the airline that currently flies to 10 Brazilian destinations, as well as Abreu Viagens, Portugal's largest tourism operator and considered the oldest in the world. The meeting with TAP resulted in the expansion of the Stopover program to five Brazilian cities and, in the case of the agency, the participation of Brazil in the Mundo Abreu Travel Fair, dedicated to the end client, to be held in Lisbon in April.

. Santa Catarina has participated for the first time in BTL and according to Nagel Mello, in the Marketing department of Balneário Camboriú, "Portugal is a priority market for Brazil because the region also has a strong Azorean community and our expansion in the arrival of tourists from Europe to our State can start with the Portuguese public". Representing the capital, after a long period outside the circuit of promoting tourism abroad, the City of Florianópolis, together with the Convention Bureau, Floripa Airport, and other trade companies, joined BTL with its own stand and with interest in showing all its beauty to the European tourist as well as passing information to the Portuguese travel agents.

. According to the secretary of tourism of Paraíba, Gustavo Feliciano, participating in BTL is a golden opportunity because Embratur has done a great job in promoting tourism abroad and the market in Portugal is very important, since it is the exit door of many European tourists and at the fair there is a possibility to showcase the country's natural beauties.

. At the Brazilian stand, Embratur received more than 10 state and municipal secretaries in the sector, from all regions in the country, besides the Federal District governor, Ibaneis Rocha, who declared Brazil to be the tourist destination of all Europeans.

. Marcelo Álvaro António, Minister of Tourism, pointed out that Brazil's participation in the 2019 edition of BTL "values the connection between the two brother countries, since Portugal is Brazil's main air hub in Europe. With the measures already in place to expand Brazilian air connectivity, I am sure that we can better capitalise on our historical and cultural affinities and turn them into opportunities to increase the number of Portuguese visitors to Brazil. Today, they represent only 2.2% of foreign visitors in national destinations, a number far short of what we can reach."

. The Embratur team also held a meeting with Cape Verde Airlines in order to expand its operation to São Paulo and Rio de Janeiro, as well as Recife, in Pernambuco; Fortaleza, in Ceará, and Salvador, in Bahia, which are already established routes. As of the second half of the year, Cape Verde Airlines will also promote, along with Embratur, roadshows with operators and tourism agencies from priority European markets, such as France, Portugal, Italy and Germany.

. João Pessoa, capital of Paraíba state, and Maceió, capital of Alagoas state, are expected to be the two new destinations for TAP in the second half of 2019.

. Confirmed by the Vila Galé Group president, Jorge Rebelo de Almeida, an investment of 150 million Brazilian reals (about 35 million euros) in a new resort in the municipality of Una, in the south of Bahia. Baptized Vila Galé Costa do Cacau and planned to open in 2021, it will have 467 housing units, in addition to being all inclusive, following the pattern of other hotels in this group. With a unit in Guarajuba, on the north coast, and another in Salvador, the State of Bahia becomes the main base of Vila Galé in Brazil. This investment is estimated to generate 350 direct jobs in the municipality.

The key to social media is in their recipe

The key to social media is in their recipe