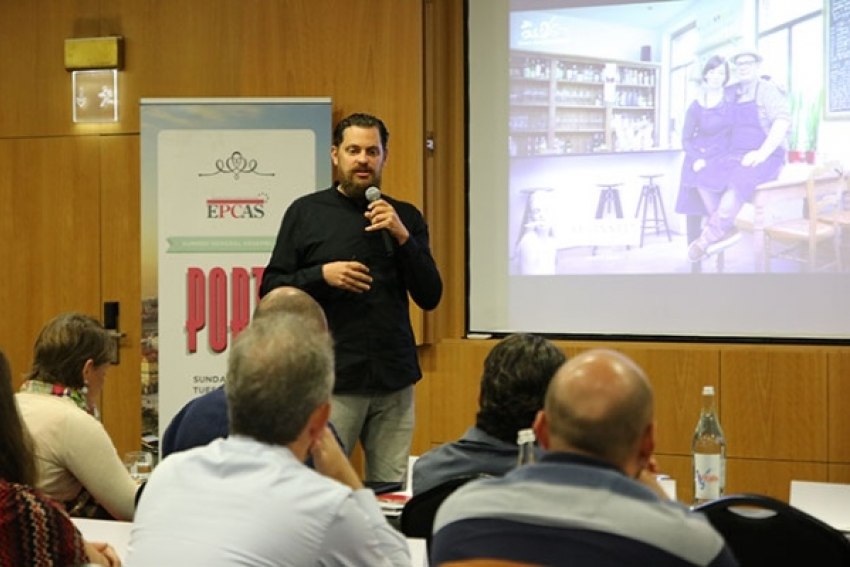 EPCAS Congress: Main Catering Trend? Reconnect!
One can not say that Frank Lindner, from Food Inspiration, has a dull life

One can not say that Frank Lindner, from Food Inspiration, has a dull life. He is a food trendwatcher, and travels the world to experience new flavours, restaurants, and making presentations on those that are the major trends and innovations in the world of gastronomy, restaurants and catering. He is aso a content producer that we can follow in Food Inspiration magazine. He was the keynote speaker of the General Assembly of EPCAS - European Party Caterer Association, a meeting that brought together this summer in Porto some of the leading catering companies and where the Foodlovpyramid was presented, a theory based on Maslow's pyramid.

Food is our daily energy source, fuel, and this is the basis of everything, but immediately after there are health related issues. Today, in broad population segments, eating healthy concerns are increasing and, to meet the demand, there is a growing alternative of both products and restaurants. Then, there are questions about the origin of food. Currently, people are aware that the choices they make have an impact on global warming, hunger, obesity, etc. Only then food comes as a brand identity and lifestyle. Millennials (born after 80's) are, according to Frank Lindner, the "foodgeneration", not minding waiting in queues to taste something special, served by someone special. Reconnecting is at the top of the pyramid, and that's where companies should invest, advises the speaker. Elements such as creating empathy, differentiated service, the explanation of what we are eating, choosing the right ingredients, the opportunity to eat and cook together, helps reconnecting people through food. There are several other trends to take into account, with regard to food and ingredients, which were shared by Frank Lindner during the congress. Here are some of them:

- Eating every hour instead of three meals per day. There's an option for smaller but more regular portions, that is eating less but more often;
- Preferential use of local products;
- Increasing use of eggs in the diet;
- Increasing option for soup;
- Growing consumption of mushrooms: since we can not eat much meat, mushrooms seem a great source of protein;
- Use of seeds, since they are rich in nutrients;
- Insect inclusion in our diet, something that is already happening in Asia. In the West, says Lindner, you must change mentalities, but sooner or later it will have to happen;
- Laboratory meat production, which is already in trial;
- Increasing vegan and vegetarian options;
- Concern about the impact of food in health;
- Growing use of yogurts with flavours, including salty;
- Craft drinks option.

In terms of business trends, for the catering companies, the expert points out:

- Quality is more important than quantity;
- Spectacular, high quality and sophisticated restaurants / bars, in areas with high traffic (train stations, airports, etc.);
- The surge of "prosumers", consumers who become producers. Each person can make their own restaurant;
- Technological component strengthening. Today, for example, there are vending machines with a link to the consumer's medical records; or kitchen robots that deal with almost everything:
- Gastronomic Tourism. The food is becoming more and more a major criterion for choosing the holiday destination.

To conclude, and taking into account all these trends, Lindner called for this sector's ability to differentiate and innovate.

Mobile app on events, how long we can postpone it?

Did you ask for portable accommodation?