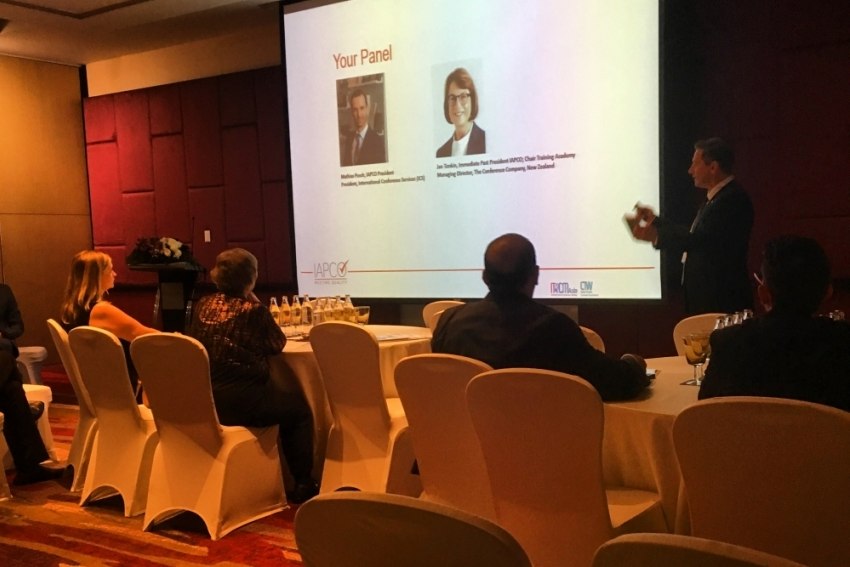 IAPCO: Return on time on the agenda
One of the IT&CMA educational sessions was hosted by IAPCO.

IAPCO - International Association of Professional Congress Organizer is one of the leading associations in the meetings industry. In 2018, it closed the year with 133 members from 40 countries, representing 9105 professionals and 18662 events. Mathias Posch, president of IAPCO, refers that the number of meetings has increased over the past 55 years, according to data from International Congress and Convention Association (ICCA). However, if growth in Asia and Latin America is a reality, in Europe and the United States there is a decline. The Asia Pacific market has some important players: Japan, China, South Korea, Singapore, and Thailand. The number of participants is also decreasing. There are not many mega conferences anymore,” he highlights, with the landscape now consisting mainly of more specialised meetings. The events that increase the most are those that receive between 50 and 149 participants. In terms of field, technology-related meetings are on the rise, in a ranking led by the medical sciences.

An important fact is the decreasing use of congress centers to host events. By contrast, events held in Universities have increased. This translates into savings for organisations, which requires congress centres to think outside the box in order to continue to attract membership meetings.

According to data from the 2018 study "The Science of Healthcare Congress", 2.25-day events are ideal. Most survey participants intervirwed are only available for trips up to 4.73 hours, and a maximum of 3.26 days away from the office. Something outside these numbers requires a great deal of persuasion and argumentation, mentions IAPCO president.

This study also focuses on the motivations of delegates to participate in a scientific congresso. Top reasons include content and the possibility to know new products, followed by meeting the opinion leaders in their fields, and thirdly networking with colleagues. Among the reasons for not attending events arise: lack of time, cost, distance, and lack of sponsorships. 85% of respondents prefer to go to national meetings.

Once in the event, the main challenges for participants are attending all the most important sessions, taking time to meet people and visiting all the stands. IAPCO president's advice is to create a program that focuses on the delegate's needs and the educational side, which he values ​​most.

In conclusion: Asia is growing; there is great potential in regional congresses; attention to“return on time”; events remain very important in delegates training and career. That said, what is the PCO’s role? How do delegates want to learn, what do they want from events? Jan Tonkin, former president of IAPCO and director of The Conference Company, believes the PCO has to be a project manager, strategist, computer expert, data analyst, fundraiser, risk manager, a cultural advisor, a marketeer and a financier, that is a meeting designer.